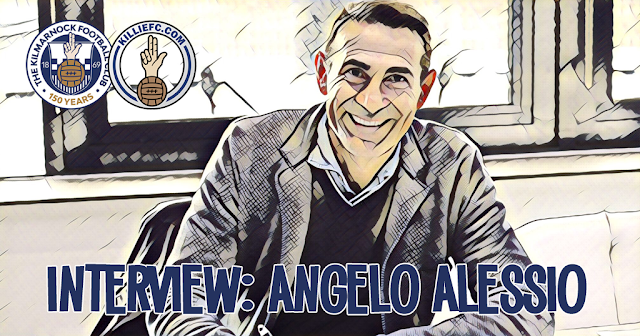 After reading the xenophobic diatribe by Parks in one of the tabloids (online of course, I wouldn’t buy that rag) I thought it was time to look out the old micro recorder and have a chat with the new manager myself; instead of reading the ravings of a frustrated ex-player who clearly thinks his ill-informed opinion is far more important than anyone else does. The word went out and we collated many questions and chopped them down and amalgamated them into something more deliverable and wouldn’t take all day as the grass won’t cut itself, sadly. Angelo Alessio didn’t need much persuading as he is keen to talk to fans so a day later we sat down in the Champion's Lounge with Scott McClymont and after a few introductions we got straight to it…

What would you say were the key factors that attracted you to the job here at Kilmarnock?
"The chance to restart my career as a manager at a great club like Kilmarnock. I watched the game last season against Rangers on TV and was impressed with the passion of the fans and the mentality of the team."

Has anything surprised you since you have arrived?
"No, not really, I think in Scotland now there are a lot of good players and this is good for the league, the quality of the Premiership is good and getting better."

Can you tell us about your preferred style of play for the team or will you adapt the formation to the players we already have?
"I have a lot of players at Kilmarnock who were here last season, and my preferred style depends on the players I have in the squad. In this case we have a good base and for this reason I continue to do, not quite the same work as Steve Clarke, I will change some things, but I don’t want to change the style too much. You will have seen in the previous game that ten of the eleven players were from last season, only Makrini was new. In the defence we had three international team players and Broadfoot. In the midfield we had Dicker, Power, Burkey and Rory with Brophy up front, only Makrini was different. It would be stupid to completely change style when the main body of players have been playing the same style for the last few years."

What do you think were the main factors in the team’s defeat against Connah’s Quay in the Europa League? What have you learned as a coach from this result?
"I believe that if we had scored a goal in the first half this would have changed the game. We had four or five opportunities to score a goal in the first half, but at the end of the game lost 2-0 and that result was bad. This is football though and we have to accept the result, but over the two games I think we deserved something more. I watched the games back and analysed them…in the first game we conceded one opportunity and Connah’s Quay scored a goal, but we dominated the game. At home we again dominated but conceded three opportunities and two goals. We made mistakes, but overall I feel our team played better, if we’d scored a goal in the first half everything would have been different. At the same time we have to accept the result, but I would like to say that not everything is bad, there were positives to build on."

What do you generally look to focus on in your training sessions and would you consider an open training session for fans to come along and watch?
"I like to focus on players training together, not alone, that is important. My focus right now is to find the same compactness that we had last year. The players work hard every day but of course at this moment in time, after the bad result, we have to work on them having the right mentality, the right attitude and the right focus to prepare them for the next match. We hope to arrange a session for fans to come along and see our preparation work."

What is your target for the new season, have you set any bench marks for us?
"It is important to start the league in the right way and then to do as well as possible this year and be the best we can. Every player will have to give 100% to reach our best position in the table. We will work to stay in the top six, but it is a new year and a new challenge for all of us. The players are working hard every day to maintain the standards they set last year and won’t let them slip. Coming third means there are high expectations, it was a great achievement but we have lost eight players who came in on loan and currently only have two so we have to focus on bringing more quality players in."

Do you treat cup competitions with the same importance as the league or do you see them as a bonus?
"Going into a new season, every game is equally important. We want to do our best in every competition."

In terms of transfers, are there any players close to joining and can you tell us how many players you hope to add to the squad?
"At the moment we are talking to a few players and I hope to sign them soon. It has not been easy, for many reasons, but now, with a week to ten days until the start of the Premiership, we are nearly there. Hopefully we will have some good news at the start of next week."

Have you identified any areas which you think you need to strengthen?
"We definitely need strikers, midfielders and one centre back. We are casting the net wide and we are looking at any player that has the potential to improve the team, but they have to be the right fit for Kilmarnock."

What is most important to you when assessing potential signings, mental, physical or technical attributes?
"I’m looking for players who have the motivation to come to this club, and the right mentality to fit in with this team…players with skill and experience."

Have you had an opportunity to assess the youth players and do you feel there are any showing enough potential to be considered for the first team?
"A couple of the younger players are training with the first team already and they are performing very well. I hope that they can improve in the next few months or so enough to be given the chance like every other player. For me age is not a problem, they are good enough they will go into the line-up."

Have you taken any positives from the start to the season and going into the new league campaign?
"It has been good to see the way the players train every day. They have the right attitude and the right focus and they also show motivation and determination and that is very important for me. These players give me confidence that we can get good results in the future."

The manager then turns the tables on me…

Fan perception is very important to me. What do you think about the start of the season?
"There are a lot of Kilmarnock fans feeling pessimistic at the moment as they are still hurting after the Europa league exit. It was a long time to wait just to go out that soon and I think it’s a long way back to try and recover the situation at all. As it stands at the moment there is a lot of silence and not much happening because there are no friendly matches lined up, and that’s why we are doing this today, to get something out there. When there is a vacuum like this people tend to create their own stories and it is much better for the fans to hear directly from the Club and yourself rather than read the fiction they put out as news copied straight off social media. Hopefully when things start moving in terms of transfers and results we can gather some momentum and the whole place will get a lift…the sooner the better of course."

With that and the shake of a hand the new manager is ushered away to discuss a potential friendly match. He’s seems a nice enough guy and pretty relaxed and not out of his depth whatsoever. His English is probably not as good as I initially thought (mine is not that great either) but when it comes to talking football it is noticeably better and I don’t really see there being a problem getting instructions across to players. Despite all the rumours no one is demanding a transfer, but a few are signing extensions and hopefully we see the benefit of the quality over quantity approach that is being taken. There is a lot of panic in the ranks but the season is almost upon us and we just have to get behind the manager and do what fans do…support the team and hope for the best because, together we are still stronger.
‹ Back to news headlines
Share this page: