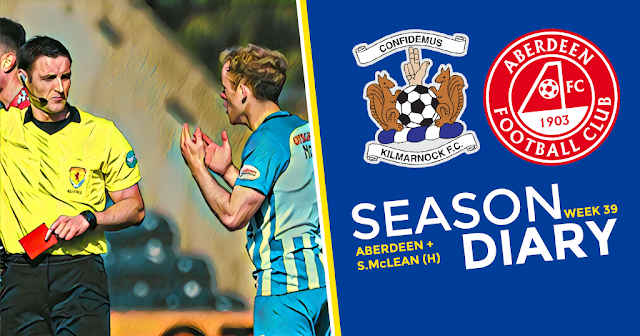 Straight away I am going to say that even with eleven players on the park I don’t think we would have won the match against Aberdeen, a draw would have been a fair result on the basis of a turgid first half.

That of course is before introducing the McLean factor into the equation…we should have let Shinnie just referee the game!

A lot of the media opinion is based on watching ‘highlights’ but only those there will understand just how badly the whole game was handled.

Cosgrove and possibly Devlin should have walked, game changers right there for starters.

It was a clumsy challenge from big Kirk but he’d get slaughtered if he never went for it; a brave save from Joe Lewis but then he goes down holding his face despite not being touched.

Next the Aberdeen players, despite what McInnes claims, surround the referee and make sure the card is a red one.

Broaders eyes were clearly on the ball, very harsh in my opinion but McLean didn’t need much persuading from the sheep.

Stuart Findlay’s wasn’t so clean cut, he definitely gets something on the ball, we have to accept the second yellow for that, but did he deserve the first one?

Kris Boyd comes on and gets booked for a 50/50 challenge before touching the ball, literally two minutes later a Dons player gets away with the exact same thing.

I would say McLean had lost control by then but truth be told he never had control in the first place.

The final insult was the sending off of Rory McKenzie; he retaliates after being elbowed and head butted on the leg, yet Ball gets away with it completely.

The stats tell us that Killie were guilty of 18 fouls, Aberdeen 22, you'd never have guessed that based on the card count!

Steve Clarke will be in trouble next after his post-match comments…despite speaking the truth the SFA will close ranks and protect their own.

It is the reputation of our game they are supposed to be protecting and yet they will say it is us that is making it look bad for indiscipline, the lunatics are still firmly in charge at the asylum.
‹ Back to news headlines
Share this page: