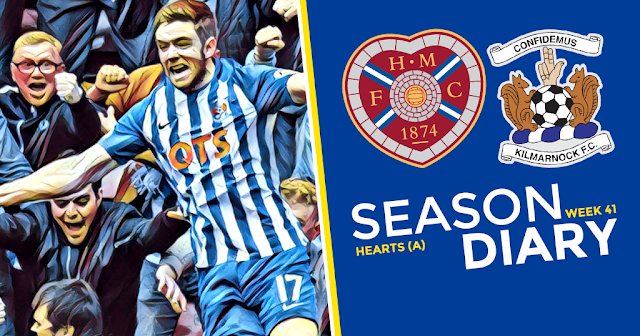 There were absolute scenes at Tynecastle again as Stuart Findlay cracked home the winner in the final few minutes of Saturday’s match.

We sold out our allocation and they had to open pay gates as a vociferous blue and white army rolled into the capital.

It was a strange first half as there only seemed to be one team doing anything, we were making all the chances and also making a few mistakes, but there was no goals to be had at either end.

We lost momentum in the second half when Uche Ikpeazu went off injured and Hearts had to change their tactics and play the ball short.

The last twenty minutes were ours again though, and the winner was a real team effort; and how we celebrated it.

It is all in our own hands now, we sit in third place with better goal difference than Aberdeen with two home matches left and two cracks at a Europa Cup place.

It’s far from job done yet though, let’s fill those stands at Rugby Park and do our bit.
‹ Back to news headlines
Share this page: