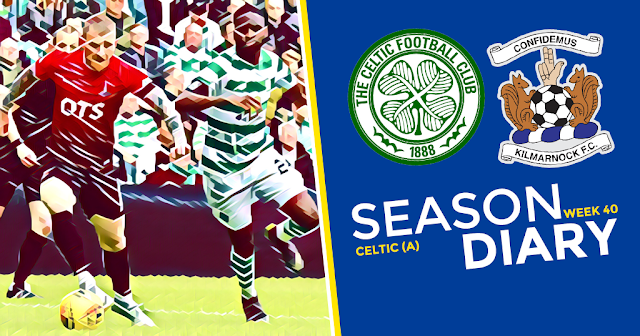 Another week goes by and the big talking point is again a dodgy referee decision.

To be fair to Willie Column he was nowhere near as bad as the numpty last week; but he still missed a blatant push by Scott Brown on Steven O’Donnell in the box, which would have afforded us a chance to take the lead at Celtic Park.

Killie were the brighter of the two sides in the first half of the match and on another day could have scored three or four, but it wasn’t to be.

There was a smaller than normal support through to shout on Ayrshire’s finest, but what we lacked in numbers we made up for in other ways.

Respect was duly paid to Billy McNeil when appropriate but during the match, apart from a few instances, the small pocket of our fans made more noise than the home support.

A clear case of quality over quantity, but it was still disappointing to see our numbers drop.

Hopefully we will make up for that over the last three matches, buses for Tynecastle are being sold out already.
‹ Back to news headlines
Share this page: